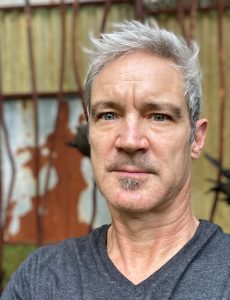 Randy Gachet earned a BFA, concentrating in sculpture, from Birmingham Southern
College in 1987. In 2002, Mr. Gachet joined the visual arts faculty at the Alabama
School of Fine Arts in Birmingham. Gachet’s work is consistently exhibited in galleries,
non- profit spaces and museums throughout Alabama and the Southeastern region. His
work has been featured in solo exhibitions at the Lowe Mill Arts and Entertainment
Center in Huntsville, AL, the Johnson Center for the Arts in Troy, AL and the Wiregrass
Museum in Dothan, AL. Gachet’s sculptures and installations have been included in
Digital Graffiti 2013, Alys Beach, FL, HomeGrown Southeast Exhibition 2007 at the
Southeastern Center for Contemporary Art, Winston-Salem, NC, Questions to the New
South: Politics, Politics, 2006, Space One Eleven, Birmingham, AL, the Red Clay
Survey of  Contemporary Southern Art, 2000, 2007 and 2017, Huntsville Museum of Art
in Huntsville, AL. and the John and Joyce Cadell Sculpture Garden, Montgomery
Museum of Fine art, Montgomery, AL. Awards received include 2009 Art Teacher
fellowship from the SURDNA Foundation,  2008-2009 Individual Artist Fellowship from
the Alabama State Council on the Arts, merit awards from the 2007 and 2004 Kentuck
Arts Festival, merit award from the 2013 and  2004 Magic City Art Connection, the Spirit
of the South Award from the 2004 Art with a Southern Drawl juried exhibition at the
University of Mobile and an award of merit from the 2000 Red Clay Survey :Seventh
Biennial of  Contemporary Southern Art. Gachet’s work can be found in public
collections, including the Huntsville Museum of Art, the Wiregrass Museum of Art, UAB
Comprehensive Cancer Center and the Southern Environmental Center at Birmingham
Southern College, as well as, private collections across the country.